Oh how it all changes in a flash.  One day, two days, three days and it’s a whole new Oz.

(This is a dangerous post  It’s bold to say ANYTHING about this; if I were more widely read, I might incite some serious pushback? )

All dressed up and and ready to get saved, Kavanaugh was sent to fetch a broomstick.  He must conquer the trials of his character, emerge victorious so that the grand wizard will grant him, finally, the ability to get home, his final destination. (which is all illusion, we know — spoiler alert?) 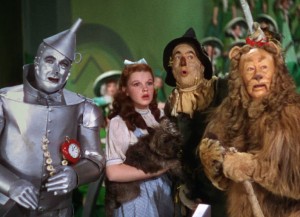 Is this “home” a death of some kind, or a seat on the U.S. Supreme court? 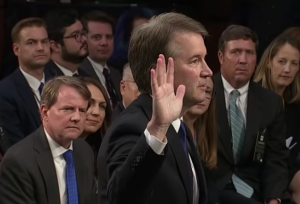 I could spin this allusion to the Wizard of Oz with each detail, but we turn it from “G” to ” R” in a sec.   (I’ll save you the visuals of teenage sex, okay?)

Now for the”PG rating of an extended editorial, an academic paper:

Could it be the inevitable result of a dark side of change?

Will this be a downfall of an innocent man?  Or will Dr. Blasey be a Glinda after all?

We’ll never know what happened  between them 35 years ago.  It disturbs me up when all the pundits talk about “getting the facts”…oh come on, who do they think they’re kidding? FACTS?  there will be no facts here.

Kavanaugh is a white man. Privileged.  Pampered perhaps?  Smart as the dickens…successful to the top level…  Is it TIME?   Is it time for someone like him to take the hit…or is he just another perpetrator?

That’s the dramatic arc of this story, the shape of a Shakespearean tragedy perhaps?  – the fall of a man, his tragic flaw, etc…?  or  is this simple melodrama?

Can we ever find clarity in a blurry morass of “he said/she said” testimony, anecdotes and character witnesses, not to mention the power and deception of our own selective memories, both positive and negative?

Blasey suffered some trauma, and for this, I feel for her.  She apparently struggled for years, and now,  she’s about to be torn to shreds perhaps.   But Kavanaugh has every reason to deny every ounce of it – it’s a seat on the supreme court, by god, and even if he did it and recalls it,  who would lay down and die at this point?  An honest, noble gentleman?  The beloved Scarecrow?  The smartest one of all?

On Saturday I found myself rolling my eyes—“oh my god! Can you believe this?”  And Feinstein, shame on her for playing such an ugly card…and at this late in the game.”  It’s true I’m not a Kavanaugh hater.  Nor am I a Kavanaugh cheerleader.  I listened to the stumping and the parade of political antics during the confirmation hearings…I was embarrassed for them all, on both sides.  I wanted sober discussion of constitutional details, I wanted to be educated, I wanted to be inspired.  At first, it appeared as though I might get my civics lesson, but by Wednesday afternoon, the whole thing had lost any meaning.  Kavanaugh dodged and parried, while many of our elected officials blubbered all over the room.  A lot of my best buds are fearful about Roe. But I have maintained an even keel, a measured response.  I don’t really believe he’ll do anything so heinous, so backward… Am I just in denial?  Am I blind?  Am I tired of the hyperbole and frenzy?  Do I just want some serious, high-minded discussions about the nuance of the philosophy of law?  Do I want an insightful peek into the complexities of morality and the formation of laws, a reminder of the great history of civilizations grappling with the concepts of guilt and innocence?  Do I just want to think that there’s NO WAY WE CAN GO BACK like that?  Of course, I’m having trouble every day with this notion…seeing and feeling a backlash of so much my generation fought for (blah blah blah).

Yes, on Saturday, I responded the way I assume many others did. Oh my god, high school?  And how many of us were totally stupid about relationships, flirtations, sexual encounters?  How many of us just did DUMB things, drunk or not, at parties or not, as we blundered our way through the years?  WAIT WAIT…this is no defense of ASSAULT OR RAPE!   But that was not the way it sounded on Saturday.  It sounded like he got a little rough with her, tried to take her clothes off, and she fled.  I KNOW I KNOW… this is not just stupid – it’s cruel, it hurt her, and he was wrong.   How many people started to think about their high school days of stupidity?  How many people started wondering, Oh my god, did I possibly assault that guy?  That gal?  when all I wanted was to get into bed with them as quickly as possible?  What about that time, and that time, and who remembers it in which way?  And how will I ever know?  And might not some young man come forward and say that I grabbed him the “wrong way”then try to get me fired?  It’s possible.  Of course it’s possible.  Unless you are someone who has never strayed outside of  one exclusive, “perfect” relationship, (count them?  2?) have you not had the same thought?

But something changed on Monday. She is no longer anonymous.  She has a name, a history, a husband, a therapist, a case.  Now she is a woman who had been hurt—she is damaged, she is a victim.

And let’s all  say what’s true here – #MeToo is a victory for the victims.  It has liberated us, allowed us to come forward with these stories and to start healing.  This is all good.  But what of the dark side?  (Everything has one)

No one wins now.  If Kavanaugh is confirmed, he will live under this shadow. Maybe I should have a small violin for him.  Is this not true of  JuasticeThomas?  If Kavanaugh is not confirmed, will Casey’s life be improved?  She already has book tours and movie offers, no doubt… fame will bring her a mixed bag of friends and enemies.  Will her injury be healed? Will her family heal?  This is a hard call.  It appears as though a lot of healing has already taken place.  If Kavanaugh is not confirmed, will his whole career be tarnished now?  A failure at the highest level?  Will he want to, or have the confidence to sit on the bench for the rest of his days, knowing he did not pass this test of the public’s trust?  And why should I care about a perpetrator in this case?  He’s had a good run, eh?  Success and privilege, money and power… welcome to the world of the rest of us buddy…struggling to be heard, struggling for recognition and public legitimacy.  Of course, maybe he will make peace with his god,  and peace with his family, and so good for him, since that is all that matters to me in the long run.  Good for him, if that’s his path.  But has a good, decent man fallen?  Fallen because someone has to.  Because it’s time.  Because he is paying for an ancestral failing of some kind, born into a King’s robes,  a King’s privilege?Someone has to take the fall for this?

Or is he just another fake wizard?

So here’s another ugly truth.  Where’s my own unconscious bias in all this?  Did I meet Brett Kavanaugh on the airwaves like the rest of the world last summer, and immediately think he was a “good guy.”  He looked like the pretty boy in the nice neighborhood, where baseball and apple pie where abundant?  Did I like him right away because he appeared so familiar to me, so much like men in power that I had grown up with?  Did he just look like the innocuous insurance guy from next door? Why didn’t this turn me off, make me suspect right away?  I certainly have no automatic respect for the white privileged men of my generation…or do I?

And what happens to his daughters today?  How does he tell his daughters that he is in trouble with the whole country because he tried to fuck a girl when he was drunk off his ass and now she is coming forward with a claim of sexual assault?    How do they process this idea about the hero father?  Do they have to grow up so fast and painfully?   Are they victims of the American Public life at this point?  His wife will deal, I suppose… I assume she can be adult about the circumstances, but now she, too, will have to strengthen her resolve—stand by her man?  Oh oh oh…

Have we always been interested more in sex than in civil liberties?  Sex and its constant mystery…add sex to a story and you give it ten times more possibility of commercial success.  And sex to the vision of The President and it’s all we see..Monica Lewinski, even JFK’s love affairs have dominated his portrait of late.  Are we so fascinated by the President’s penis because it reminds us all of a basic human fear: Are we normal to have sex drives, do we not all have genitals that drive us to stupid choices in our lives?  Is it possible that our leaders, too, have body parts that we all have too?

This is sounding like more a defense of Brett Kavanaugh, and I don’t want that… on Saturday evening, I felt sorry for him.  On Monday, I started to question my own feelings and ideas, growing some anger and distrust. I started to relate to Dr. Blasey – an accomplished, strong woman who, too, had been put upon most literally in my younger days. Damn you all to hell, you arrogant powerful men, you boys in the boys club, privileged to do anything really…oooh, go to hell, all of you.

On Tuesday, I am sad for all of us. 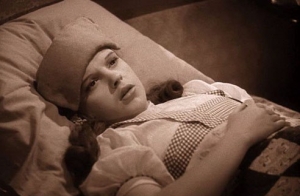 I’ve always wondered about the end of The Wizard of Oz… was it real?  Sad?  Happy?

This site uses Akismet to reduce spam. Learn how your comment data is processed.